The Unsolved Mystery generator generators random Unsolved Mystery content. Usage - You are free to use anything generated in your creative works. Because the generators use AI to create content it is possible it may create words or sentances that are owned by other parties. This is up to you to check. And as always, feel free to link back if you use our generators.

How to Generate a Unsolved Mystery

1. Roopkund, is a high altitude glacial lake in the Uttarakhand state of India. It lies in the lap of Trishul massif. Located in the Himalayas. It is widely known for the hundreds of ancient human skeletons found at the edge of the lake. The human skeletal remains are visible at its bottom when the snow melts. Research generally points to a semi-legendary event where a group of people were killed in a sudden, violent hailstorm in the 9th century. Studies placed the time of mass death around the 9th century CE (1,200 years old) and second group of skeletons were dated to 19th century CE. The skeletons identities are unknown, but radiocarbon dating suggests that the older remains were deposited over an extended period or time, while the remains of the younger group were deposited during a single event.

2. George Mallory (37), was an English mountaineer who after taking section in the first three British expeditions to Mount Everest disappeared on ethier 8 or 9 June 1924. On 1 May 1999 Mallory's mummified body was found, and his cause of death is unknown.

3. The events that led to the death of German youth Kaspar Hauser (21), remain a mystery, just like many other points regarding his life and identity. On 14 December 1833, he came home with a deep stab wound in his chest of which he died three days later. While he had claimed to have been attacked, the court of enquiry doubted this due to inconsistencies in his claims and speculated that he wounded himself in order to seek attention and revive the fading public interest in him, a theory that is also supported by some historians today.

4. Amcotts Moor Woman is the name of a bog body that was discovered in a bog close to Amcotts, Lincolnshire in England in 1747 of a female who lived during A.D. 200â400. Almost no details are known about her and the cause of her death remains a mystery.

5. Edgar Allan Poe (40), American writer, editor, and literary critic, died on 7 October 1849, below circumstances that remain mysterious. The circumstances leading up to it are uncertain and the cause of death is disputed. On 3 October 1849 he was found delirious in Baltimore, Maryland, "in great distress, and ... in need of immediate assistance", according to the man who found him, Joseph W. Walker. He was taken to the Washington College Hospital, where he died days later.

6. In 1951 human bones were found and were thought to be the remains of Percy Fawcett (57), who had disappeared on 29 May 1925 in Mato Grosso, Brazil, This was proven to be untrue and they remain unidentified.

7. Billionaire and convicted sex-offender Jeffrey Epstein (66), was found dead in his jail cell at the Metropolitan Correctional Center in New York City in August 2019. His death was ruled a likely suicide by the New York City Chief Medical Examiner, although reported questions of it being a homicide committed by an unknown assailant, possibly as a way to silence him from exposing anyone else involved with his crimes. His death is still currently under investigation by multiple groups.

8. Karen Silkwood (28), a nuclear power whistleblower, died in a car accident on 13 November 1974, while driving to a meeting with a New York Times reporter in Oklahoma City. Whether that accident involved another vehicle, whose driver may have knowingly run her off the road, or resulted from her own fatigue, remains a matter of debate.

9. On 11 August 2001, Irish musician Paul Cunniffe (40), previously of the bands Blaze X and the Saw Doctors, died in a fall in the London neighborhood of Whitechapel. The circumstances that led to the fall, or even exactly where it occurred, however, remain unknown. His is one of several deaths among friends and acquaintances of Pete Doherty.

10. Shedrick Thompson (39), was an African-American man from Fauquier County, Virginia, who was accused of crimes against his white employers in 1932. He was later found dead, hanging from a tree. Upon discovery, his body was mutilated and burned. While an official verdict declared it a suicide, others maintained that he was lynched. 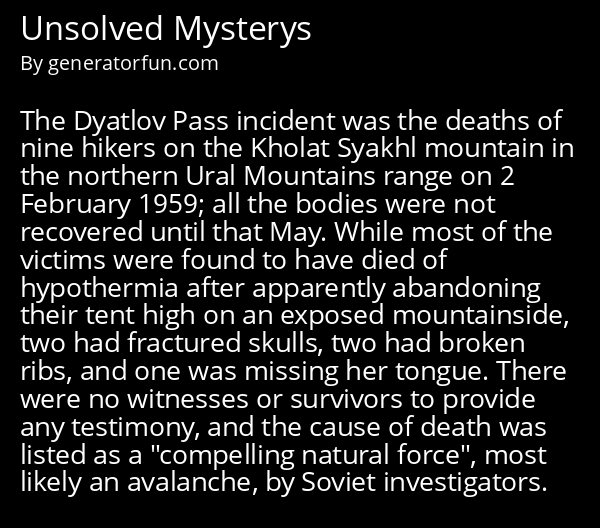 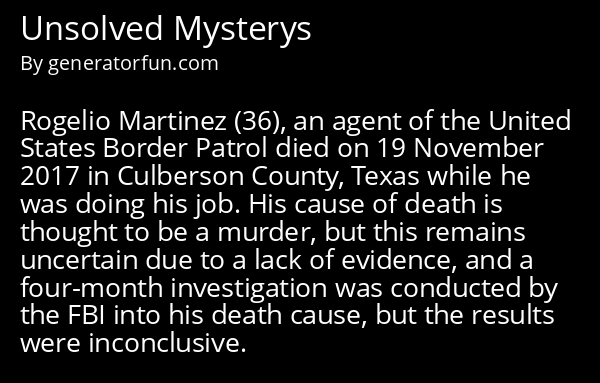